The pumpkin sits, uncarved, on the front steps, and the massive bowl of Halloween candy sits undisturbed near the door–so, surely, it’s too early in the season to invoke Charles Dickens and A Christmas Carol.

But here I go–because it’s never wrong to call on  Dickens (!), and because Europe is a haunted continent.  At Halloween, on Christmas, or any given day, its history is rich and messy, and its ghosts,  like Jacob Marley, won’t be silenced.  In our experience, these specters whisper at you from around each corner.

In a nearby town  there is an odd sign designating a speed limit for tanks.  I occasionally pass this, and I always laugh and cringe at the same time.   I assume it is a remnant of  Cold War times, although this is just a guess. Maybe troop movements around here are frequent enough that this is still warranted?  Either way, I find the sign both amusing and jarring.  Do I need to be worried about tanks rolling through the city center?  Probably not, but it does make me think of the citizens of Ukraine, where the everyday reality is more raw; and it also conjures a not so distant past in this historically complicated country. 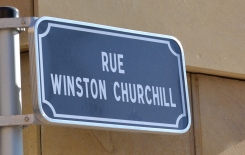 In Metz, France–the city that brought us a war hero in the unlikely guise of the baker Harelle (see post “The Bread is Mightier than the Sword”)–you can’t help but see the ghosts of the past on each block, beginning with the chapel  of the Knights Templar (to the right) 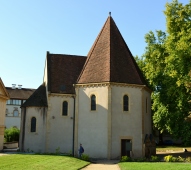 and running up through the Second World War and the present day streets honoring the likes of Winston Churchill.

I’m always stunned by my ability in Europe to walk a city block in space  and feel that I’ve walked a thousand years through time and history.   William Faulkner may have had the American South in mind when he wrote, “The past isn’t dead; it isn’t even past,” but his words seem to reverberate off the stone streets of Europe.  We tread on hallowed ground and haunted ground–and I couldn’t tell you were the one starts and the other stops.   Especially regarding the somber ghosts of the Second World War.

I find myself pulling against visiting the concentration camps, at the same time that my conscience keeps telling me that this is something I need to do.  I can’t imagine setting foot on those grounds and not feeling physically ill,  possessed of the anguish of the souls who were tortured there. But those anguished souls need us to remember, don’t they?  We owe it to them.   I can tell you, my own Marley-esque specters are visiting me on this one.

Not all ghosts are war-torn and tortured souls, however.   Our historical imps deserve to be noticed too.

So, as a sidenote on Dickens and his ghosts, here’s a travel tip for London:  The George Inn in Southwick.  It sits on the south bank of the Thames, is an old (400 years old, give or take) pub that’s been in business all these long years.

We stumbled on this pub in 2010.  Although we didn’t stumble, really–I dragged my family out of their way to have lunch here, and it was a very good call.

Why make a grand effort to eat at this pub in a city full of pubs?  Partly because of its general history–in business since the 1600’s; still boasting a gallery of balconies where plays and concerts used to take place, it is reported to be the last remaining galleried inn in London; and (here’s the kicker) an old favorite of Charles Dickens.  The food here was great; I had a grilled goat cheese salad that I remember 4 years later! Granted, our waitress was less “waitress” and more “table wench” in attitude–but, if nothing else, it added a Dickensian touch to the meal.  And our inquiries about the history of the inn and its famous patrons lead to a journey behind the bar, where there is a framed document bearing Charles Dickens’s signature.  If my rusty memory serves, it was a copy of his Last Will that he gave to the Inn owner (knowing it would have some value), in lieu of actually paying his bar tab.

In the style of a worthy “old haunt,” this speaks of both mischief and misfortune.  Our Charles Dickens was both debtor and darling, making him the perfect drinking buddy for anyone who might find themselves at the bar here and lifting a glass to old Charlie’s Last Will.  Talented as he was, his life wasn’t perfect.  Nor was it infinite:  so raise a pint and lean in toward the framed document, and I’ll wager that you’ll hear him whispering, “Cheers and carpe diem!”

(Lore has it that Shakespeare may also have been a customer–his Globe theater was close by–but the veracity of this is lost to the haze of time gone by.)

Some ghosts loom large (the scars of a world war);  some ghosts are more personal (unpaid debts).  But in this season of hauntings, it’s best to give them all their due.

4 thoughts on “All Hallows Week: The Ghosts of Wartimes Past”