A celebration of Prague:  my photo and Madeleine Albright’s words (from her book Prague Winter).

“On a hill in Prague there is a castle that has stood for a thousand years.  From its windows one can see a forest of gilded cupolas and baroque towers, slate roofs and sacred spires.  Visible too are the stone bridges spanning the broad and winding Vltava River as its waters flow northward at a leisurely pace.  Through the centuries, the beauty of Prague has been enriched by the labor of artisans from a plethora of nationalities and creeds; it is a Czech city with a variety of accents, at its best in spring when the fragrant blossoms of the lindens burst forth, the forsythia turns gold, and the skies seem an impossible blue.  The people, known for their diligence, resilience, and pragmatism, look forward each winter to when the days lengthen, the breezes soften, the trees regain their covering, and the river banks issue a silent summons to play.”   Madeleine Albright, Prague Winter. 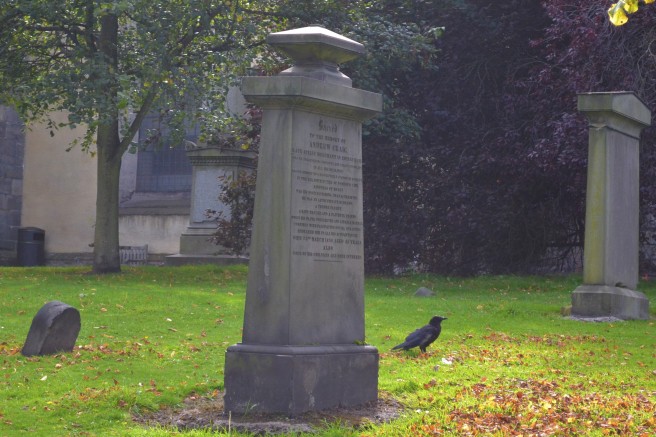 From  the Kirkyard at Greyfriar’s, Edinburgh.

“Once upon a midnight dreary, while I pondered, weak and weary,
Over many a quaint and curious volume of forgotten lore,
While I nodded, nearly napping, suddenly there came a tapping,
As of some one gently rapping, rapping at my chamber door.
‘Tis some visitor,’ I muttered, ‘tapping at my chamber door-
Only this, and nothing more.”  -EA Poe

Here’s hoping that only hungry trick or treaters come tapping at your chamber door this evening.

Happy Halloween, everyone!  Have fun and stay safe!

Rose Street, in Edinburgh’s New Town, is not particularly new.  New Town dates back to the reign of George III, which is an era many of you know for the American Revolution. In comparison to the Old Town of Edinburgh–a snarl of alleys and ginnels, a mess of hills and ridges– this New Town is bold and orderly in layout.

But orderly facades are always facades, and architectural symmetry always belies the messier lives there housed.  So consider New Town.  The main streets (Queen Street, George Street, and Princes Street) are wide and regal.  But tucked between are smaller streets– more like grand alleys– running through the blocks, like veins through flesh.  And here lies Rose Street.

Today, Rose Street is a pedestrian road peppered with bakeries, pubs, restaurants, and shops, but it still retains a “back alley” aura.  Not least because it has an outrageous number of pubs, and sometimes an outrageous number of people stumbling out of those pubs and weaving from wall to wall the length of the street.  All told, it’s reputation is generally respectable, if just a bit sodden, these days.  It’s cleaned up a bit from the red light reputation it had 60 years ago.  In fact, it’s home to many more-than-reputable restaurants — 1780 being one I can heartily vouch for.

I bring up Rose Street today, because I stumbled on the lead photo for this post the other day– a photo I took of some street art , part of a series on Rose Street.  It struck a chord, but I had no idea what the verses presented were all about.  Today, I sleuthed about the internet to find that they represent bits of a poem by Scotsman George Mackay Brown, who, as it happens, used to drink in a bar named Milne’s, sat on the corner of a street named Rose, running like a vein through the arm of New Town.

Bottoms Up, dear George!  Today I celebrate your poem, “Beachcomber,” and think about Edinburgh’s New Town, sat side by side with a very old town and perched on the edge of a cold North Sea, both harsh and beautiful.

Monday I found a boot –
Rust and salt leather.
I gave it back to the sea, to dance in.

Tuesday a spar of timber worth thirty bob.
Next winter
It will be a chair, a coffin, a bed.

Wednesday a half can of Swedish spirits.
I tilted my head.
The shore was cold with mermaids and angels.

Thursday I got nothing, seaweed,
A whale bone,
Wet feet and a loud cough.

Friday I held a seaman’s skull,
Sand spilling from it
The way time is told on kirkyard stones.

Saturday a barrel of sodden oranges.
A Spanish ship
Was wrecked last month at The Kame.

Sunday, for fear of the elders,
I sit on my bum.
What’s heaven? A sea chest with a thousand gold coins.

It might be more appropriate to call this “multi-titled,” rather than “untitled.”  In my mind, it’s a toss up between “On Thin Ice” and “The Beginning of the Thaw.”  Either title could describe both the photo and the general tenor of D.C. at the moment, but I’m not sure which is most appropriate this week.

Today the government is back up and moving and the weather has finally warmed, so things are looking up.  On the other hand, it’s still the dead of winter and, you know, mercurial D.C. politics are exhausting.  For now, I choose the non-committal and non-partisan “Untitled.”

Still, it’s a great photo.  If you’ve spent any time in D.C., you’ll recognize the spot.  I was standing at the foot of the stairs to the Lincoln Memorial (which is to my back) and looking onto the reflecting pool, with the Washington Monument and the Capitol in the distance.

I don’t recommend venturing out onto the reflecting pool, even after a deep freeze.  Even worse to do it in large numbers. Immediately after I snapped this photo, one knucklehead fell through the ice.  (Not to worry: the pool is shallow.  Still, the cold and humiliation must have stung badly.)  So there you go, the curse of thin ice.

View from the bridge walk