On the border of France and Germany, in the enchanting region of Alsace, sits the ancient town of Strasbourg. She’s the sort of beauty that can bring tears to your eyes– really.  The ancient cathedral that pops up like a startled giant as you turn the corner of a tight, wending alley;  the rustic half-timbered houses that are painted in cheery colors as a brace against the moody fog of winter mornings in Europe; the myriad small, exquisite restaurants nestled into the tiny crannies of the old town; and the thriving modern art that pulses of youth and energy.  This is the town of Strasbourg to me.  A fairytale town, both in and out of time– existing somehow as a real, brick and mortar (or wattle and daub) city, but also, so clearly, a space of literal enchantment where you are transported back to a different time, a different world, both fabulous and fierce.

But it has happened before in this place and others of its ilk.  Because what is the stuff of fairytales, anyway?  Dire cruelty always runs through their marrow: just after the achingly beautiful characters capture our hearts, just before we convince ourselves that there is a happily ever after, we get to the bones of the story.  And, there at the core, we find violence, malevolence, jealousy.  Ugliness.

Strasbourg has known its share of ugliness over the centuries: famine, border wars, plague, the German occupation of  WWII.  There was even The Dancing Plague of 1518– in true fairytale fashion, a plague that was by equal measures farcical and grotesque.  (Honestly, look it up– it’s a bizarre episode that has  zombie-overtones and a  possible psychogenic explanation.)

What I can’t decide today, my heart aching for Strasbourg (and for all of us in a world marred by cruelty), is whether this fairytale cycle of ugliness and hope, of cruelty and resilience, lifts me up in a moment of sadness or deflates my sense that our better angels will ever truly win out.

All I know is, while hope doesn’t prevent the ugliness, the cut to the bone, it refuses to end the narrative there. 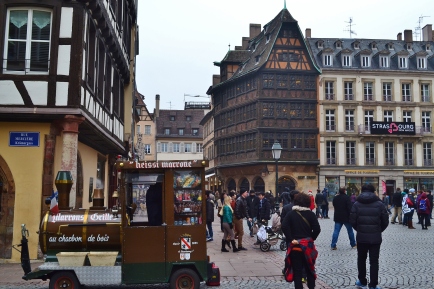 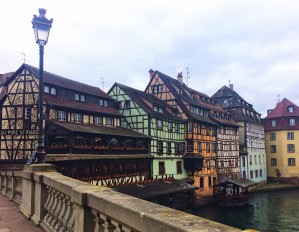