Our holiday visit to Salzburg was fantastic, but it began with a few grumbles.  No snow?  We wanted flurries and the full picturesque Christmas package, but no snow was in the forecast.  In fact, it was nearly balmy by Alpine standards in December.  (It turns out, however, that “Alpine balmy” is plenty cold as the sun drops low, so we quickly stopped complaining and huddled over our steamy mugs of mulled wine!)

I’ll give you the quick tour of our Salzburg shenanigans here, complete with photos.

We live near the French-German border, and Salzburg is nestled just into the Austrian side of the German-Austrian border.  This makes for a long drive, but we were up for it.  We left early, so we’d have a full half day as we rolled into Austria.

As we rolled in, we made our first stop at Hellbrunn Palace–right on the edge of Salzburg.  In 2014, we’d visited Helbrunn in late November, just as Christmas Market stalls were being built for the upcoming holidays.  It about killed us to see all of the preparations but miss the festivities themselves, so our first order of business was to remedy that injustice.  And Hellbrunn did not disappoint!

Hellbrunn offered a charming market and a petting zoo/nativity area for children, all set in the fantastic gardens of the Palace.  I’ll post a couple of photos here, but say little more about this, as I’ve already written a post about Hellbrunn’s market (here).

After eating and drinking our way through Hellbrunn, we headed to Villa Trapp to check in and have a quick rest–we needed a little energy before heading out for an evening in Salzburg.

The main attraction for us, especially that first evening in Salzburg, was the Christkindlmart (the Christ-child Market, or sometimes called the Weihnachtsmarkt–Christmas Market).  There were a number of spots in the city where you could cruise through markets–Mirabell Gardens (which we did the next day), around the Dom (cathedral), and Mozartplatz (where there was ice skating). 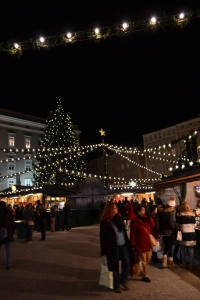 The markets were charming in the moonlight, with Christmas lights twinkling overhead and warmth, light, and wonderful smells tumbling out of each stall.  We enjoyed Gluhwein (warm mulled wine), sausages, Weihnachts Schmarr’n  in many varieties  (with nuts, apple, gingerbread, etc, this is like big bread or pancake chunks cut up and fried with sugar), sugar and apple pretzels, and white Russians in steamy mugs.

At some point, we wandered into the Sternbrau Brewery and Beergarden for a cozy dinner.  Everyone went to bed happy.

The next morning, we picked up breakfast on  the run and headed for town, with our sights set on the Hohensalzburg Fortress, sat high atop the hill over the city.  But to get to the top, you have to start from the bottom.  At the foot of the hill, we wandered through a town just starting to come to life for the day.  My nephew stuck his head around a corner, only to find that he’d stumbled on the entrance to St. Peter’s Cemetery– a familiar sight to anyone who has watched The Sound of Music. (Although I think  that scene must have been largely reproduced on a soundstage, it is clear that this is the location represented in the film.)   The cemetery is beautiful–set in the churchyard, with its back up against the stone hills of Salzburg. And those stone hills hold their own surprises. There is a doorway in the hills, to the back of the cemetery, which leads into the catacombs.

The catacombs are hand-hewn, carved into the rock of those hills.  For a small fee, you can tour the catacombs–a short but lovely tour, it’s worth the fee.  There are small chapel spaces cut into the rock, as well as windows and overlook perches, where you have a nice view of the church and cemetery.   After we had finished up with the catacombs, we started the climb toward the Hohensalzburg Fortress.

Let me say, for the record, that the fortress is fantastic and the views are not to be missed.  Within the fortress, you can wander the walls and interior courtyard, visit the fortress museum, and enjoy the Marionette

Museum there.  It’s a great place to spend an afternoon.

Still, for me, the greater treat of the afternoon was Nonnberg Abbey, which is tucked around the bend of the hill just below the fortress.  We knew the Abbey was there, but had been told that it’s  not open to enter, so the best we could hope for was to peek into the gates.  (Those famous gates from The Sound of Music— Nonnberg is the Abbey where Maria was a novice.)

Imagine our delight when we found the gates to Nonnberg open, and we were able to wander in.  The chapel (which is the actual location where the von Trapps were married) is stunning and still small enough to feel intimate.  The courtyard and garden  cemetery tucked just inside the walls of the Abbey were serene.  It was a great place to linger for a moment above the bustle of the town.

After visiting Nonnberg and the Hohensalzburg, we headed back down into town and eventually found ourselves at the Sacher Cafe– world famous for its Sacher Torte.   We ordered a myriad of desserts and nibbled off of each plate.  The cakes were brilliant and the coffee was outstanding.  We had no luck getting a table in the restaurant for lunch (reservations needed, at least during Christmas week), but I’m so glad that we made our way back for dessert.  In a city of fantastic food, this cafe ranks among the best of the best.

Honestly, I don’t remember what happened after our afternoon nibbles.  I expect we toddled back to Villa Trapp for a moment’s rest before hitting an evening of Christmas markets again.

Another night to wander the markets under the stars.  We spent a lot of time doing that, in various locations, during the Christmas season.  But it never got old.  Salzburg’s market offered so many tasty delights, and so much “eye candy”-old-world-decoration that it was impossible not to be enrapt by it all.  My favorite shop window on our last night in Salzburg was a confectionery shop that boasted a sugary replica of the Oberndorf Chapel, just outside of Salzburg.  This is the chapel where the Christmas hymn “Silent Night” was written.

After an evening of wandering, ogling Christmas baubles, eating, and drinking, it was once again off to Villa Trapp for a long winter’s nap.

We woke slowly Christmas Eve morning, some of us taking breakfast in the von Trapp’s dining room, and then set out (our bags packed for home) to visit Mondsee before the long ride back to the Rhineland-Pfalz in Germany.  Mondsee’s cathedral is probably best known as the wedding chapel in The Sound of Music, and it’s a stunner. It was a treat to see it decked out for Christmas.  And, as always, it was a treat to stop by Cafe Braun before leaving town and eat breakfast and some of the best apple strudel to be found on the planet.  (I ordered the strudel with both ice cream and cream–I don’t know if they make these out of an egg custard recipe or with some liqueur I can’t quite pin down, but they are incredible.)

We left for home with tired feet, full bellies, and a storehouse of  wonderful Christmas memories.  Next year I may be celebrating Christmas far from Salzburg, but I feel certain that Salzburg will be there in spirit– I’ll perfect my strudel and custard recipes, I’ll drink my mulled wine in a Salzburg gluhwein mug, and I’ll carry a certain old world spirit.  Like Hemingway’s Paris, Salzburg in this season will be my moveable feast.

23 thoughts on “Christmas in Salzburg and Villa Trapp, Part Two”