Maybe you’ve seen the headlines in fashion magazines, the svelte and stylish stars in tabloid print; maybe you’re a fashionista and you are in the know.  Last week was London Fashion Week and festivities took place at Somerset House–a beautiful, neo-classical complex built in the 1700’s and nestled between the River Thames and the Strand (that major London thoroughfare that runs from Trafalgar Square through Fleet Street, home to British banking and legal offices).   The first few days of London Fashion Week belong to industry insiders and celebrities, but the later part of the week is open to the rest of us. . . and that’s how my daughter and I ended up shopping the stalls and attending the Amanda Wakeley catwalk last Thursday.

It was my daughter’s idea.  (I love to look good–and have a love of jackets that borders on fetish–but I also love to be comfortable.  This means I vascillate between style-mama and sweatshirt slob.  My daughter, however, is just coming to that age where style is the ultimate, and requisite, in self expression. )

So a couple of weeks ago, I got a call from her around lunch time.  She’d just returned to school after two days of a nasty virus, so I answered the phone expecting to hear misery and fever on the other end of the receiver.  Instead of fever, I got fervid.  “Mom, London Fashion Week is in two weeks! Look it up, Google it!  We need to go!”   I wasn’t prepared for this and, lacking any other comeback, I said, “You know, that’s not much heads up, but I’ll give it a look.”  My way of saying, I’m not ignoring your request–since you are so enthusiastic–but you know that’s just not going to happen. So, it turns out, the laugh was on me.

I did Google it, and it sounded kind of fun.  Too bad we couldn’t go.

I logged on to RyanAir.com–an Irish airline known for (usually) cheap tickets when you travel within Europe.  Imagine my shock when I saw that we could book tickets on our travel days for 20 Euro per person each way.  For the next two hours, I skittered the sticky strands of the world wide web, and eventually extricated myself with airline tickets, London Fashion Week tickets, and reservations at reasonable, but extraordinarily well-located and well-appointed  hotels in hand.

So next thing you know, we were off to LFW!

We arrived Wednesday mid morning, after only 2 or 3 hours of sleep.  (One way to catch a cheap flight is to fly at a God-forsaken hour.  Ugh.)   We weren’t due at Somerset House until Thursday, so we checked into our hotel near the Tower of London  and jumped on the Tube (London’s  rail) to head out to Kensington  and make an afternoon out of Harrods Department Store and the Victoria and Albert Museum.

Harrods is a London landmark, and it lives up to its reputation.  If I were plump with cash, I could have a really good time there.  Sadly, I am not.  The clothes were beautiful, but here’s how it works at Harrods:  your daughter sees a fabulous swimsuit and pulls you that direction.  You turn over the price tag and realize that it’s an $800 swimsuit (maybe more–I’m a little vague about exchange rate math), and next thing you know the chic shop girls are reviving you with smelling salts.    And, yes, I suppose “shop girls” is outdated, but it seems to fit here, because Harrods isn’t just a store.  No, Harrods is a theatrical production.  It’s like a West End stage set, where everything glitters, and you turn a corner and –pow!–you’re in a different land.  You move from the colorful, sparkly set of the  jewelry department, to the finely choreographed fragrance floor with it’s fleet footed sales-people-spritzers, to gallery after gallery of magnificent women’s clothes, to a children’s section full of books and toys that is so visually perfect and orderly  you will wonder if any REAL children have actually been in that space in the past 24 hours, to a food hall that is amazing. . .truly amazing. 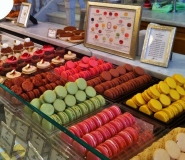 However, not to be a downer, but the $5 strawberry I ate in the food hall–plump and juicy as it was–was really nothing special.  I’m sure that’s the exception to the rule.  At least, everything LOOKED amazing.   And all the shoppers LOOKED amazing.  It really was theater at its finest.

As the curtain came down on our afternoon at Harrods, however, I had a little trouble getting out the front door.  More than a little.  Alarms went off, security guards stepped forward.  I handed over my purse and my tiny Harrods bag of macaroons.  (I had no large Harrods bag filled with thousand dollar swimsuits.)  I unzipped my coat, as the guard said, “It’s probably a clothing tag you never clipped.”  Who knew?  My year-old red ski jacket (which, note to self, is not a cool thing to wear when you shop at Harrods) had a tag on the inside that clearly said “clip after purchase.”  It had escaped my attention.  Had it said, “Clip after purchase, or you may be arrested exiting Harrods under the gaze of posh customers,” I suppose it might have registered.

So that was our interesting Harrod’s experience.  Don’t let me dissuade you — it’s a lovely store.  I’m just not sure I’ll be allowed back in.

So, on to the V&A Museum.  The truth is, I wish that I could tell you more about the Victoria and Albert Museum.  It is huge, and filled with fabulous things.  Even the “lunchroom” is a grand production.  But, honestly, Kate and I were the walking dead by the time we got there.  We’d been up all night; we’d ridden the highs and lows of walking Kensington and shopping Harrods.  We were enthralled by the V&A, but we were beat.   We entered the museum wide-eyed, immediately sat down to some nibbles in the food wing, and hoped to refuel sufficiently.

Once back in the museum, we strolled the magnificent clothing galleries, enjoyed looking at silver and furniture, and then it all goes to a blur.  We were both about to hit the mat, and we knew we were going down hard, so we grudgingly left the V&A, with so much still unseen, and headed back to our hotel.  It was time to tuck in for the evening, eat dinner, and rest up for the next day, the main event–the London Fashion Week extravaganza.