If you are considering house hunting at a distance–a considerable, oceans-apart distance–just stop right now.  It is impossible.  We’ve spent weeks trying to do the same.  And we should have known better.  We did this years ago before moving to England, and I found the perfect house.  A beautiful, stately, Victorian row house that was huge and elegant.  We didn’t put the money down, but we booked an appointment to see it within a day of landing in the UK.

And the angels sang.

What we saw in person looked more like this:

(The angels broke into a mournful dirge while I wept.)

It was still adorable, but any hopes of getting our four poster bed through the front door were futile.

Nevertheless, we look at online ads.

Here’s what we hope to browse through:

But you wouldn’t believe how many German sites post mostly these photos: 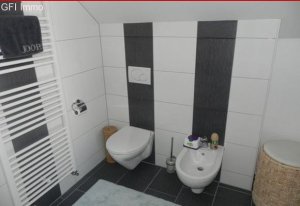 This worries me only slightly less than it baffles me.  If the owner is proud of his bidet, I’m happy for him.  However, I can’t understand why we are shown so many bathroom photos and so few living room photos, so few exterior photos.  Does that famous German orderliness beget a national obsession with bathrooms?  I’d rather not think about that.  And I’m sure there is a simple, and more appealing, reason for all of these bathroom photos.

My theory:  it’s a sign from God that house hunting at a distance is a potty-brained idea.  *Sigh.*

So, here’s the plan.  We wait until our feet are on the ground in Germany in mid June, and we scramble as fast as we can to find a place.  It’s worked for us in the past–here’s hoping the luck holds.

10 thoughts on “House Hunting in Germany at a Distance, aka Mission Impossible”